Sometimes I get into a smoothie rut. I have a few basic combinations that I rotate, but sometimes my palate is looking for new flavours.

I often look to other blogs for smoothie inspiration. A few days ago, Gena over at Choosing Raw posted about a flavour idea that caught my eye: a blueberry carob smoothie. I bought some carob powder a few weeks ago and was not quite sure what to do with it. With Gena’s recipe in mind, I decided to add it to a smoothie.

The smoothie was absolutely delicious. As Gena points out, the carob added a certain sweetness that really compliments the blueberries. The carob also completely covered the taste of the kale and protein powder. I don’t mind the taste of either, but it was still nice.

Have you made any interesting smoothies lately? 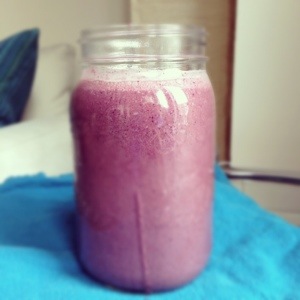